healthy-eating-for-a-healthier-life.com
Healthy eating is the best type of eating
Menu

Most Healthiest Cooking Oil, Food With A Bang! 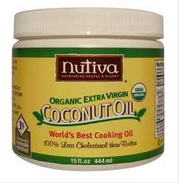 The most healthiest cooking oil base on my study is coconut oil. Coconut oil is extracted from the meat of matured coconut gathered from the coconut palm. It is very slow to oxidize and it’s also resistant to decomposing.

But what makes it the healthiest cooking oil?

Over the years people have been using different type oils to cook with like vegetable oil, olive oil, sun flower oil, safflower oil, and canola oil but never understood the pros and cons when applied during cooking or after cooking.

Now with that said let me take you into my study to show you why coconut oil to me is the most go to oil to cook with.

In my research I considered what happens to these oils when it’s under the fire. These monounsaturated and polyunsaturated oils like what is mention above tend to oxidize when under a certain amount of heat:

This causes it to change properties and damage the oil from its purities which creates free radicals. Therefore instead of promoting health, it can actually promote disease in the body.

Nevertheless these fatty acids/oils are very good for the body in their raw state when use on salads and food after it’s cooked; therefore they have their place.

NOTE: The best type of coconut oil to use is the "pure unrefined cold press organic extra virgin coconut oil".

Now let’s see why I concluded that coconut oil is the most healthiest  oil to cook with.

Furthermore when you consider cooking or frying it, it does not get damage or oxidize quickly because of its saturated fatty content. In addition it can last up to two years and it also gives your food a wonderful flavor.

You can also apply coconut oil to your skin and hair. It helps moisturize the scalp and dry skin as an added benefit.

Therefore, ask yourself this question,

if the monounsaturated and polyunsaturated oils are damaged during cooking and can promote an unhealthy environment in the body, and coconut oil remain stable during the cooking process;

does that not make coconut oil the most healthiest cooking oil to use?

return from most healthiest cooking oil to healthy food to eat

Have your say about what you just read! Leave me a comment in the box below.

The information on this website is used for information purpose only and is not intended or use for medical advise. This information should not be use to diagnose or treat any health problems or sickness without seeking professional advice from your physician. Any questions for medical help please see your doctor.

© And Healthy-Eating-For-A-Healthier-Life.com
2011 All Rights Reserve
Eat Right And Make Your Body Say Thank You!